Let’s not kid ourselves here: One of the main reasons we watch Dragon Ball is for the rad battles. Yes, we love Goku and the ultimately positive message he sends about training and working your hardest and fighting for what you believe in. But we also love when Goku slams his fist so hard into a bad guy’s face that it turns the dude’s brain into chili. And the biggest of these fights have become anime legend: Goku vs Vegeta, Goku vs Frieza, Goku vs Any Manga That Happened To Try To Compete With Dragon Ball In Weekly Shonen Jump, etc.

However, we shouldn’t ignore some of the less famous fights. Because there’s a lot of clashes in the various Dragon Ball series that don’t get as much attention as they deserve, but manage to evolve the series in a lot of great ways. And I’m gonna cover ten of those here. 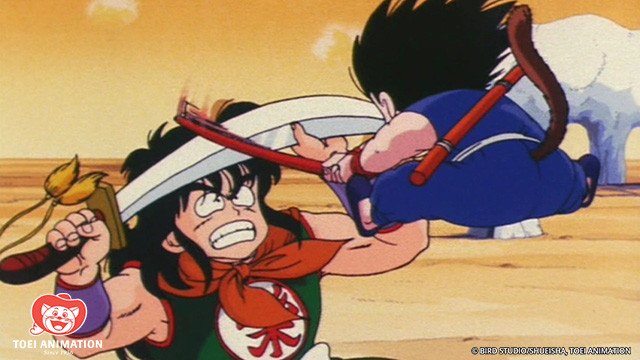 The first few episodes of Dragon Ball are basically a squash match. No antagonist, no matter their size or their personality, are really equipped to handle Goku, and Goku just mops the floor with them. This dude who can’t legally ride rollercoasters yet is the most dangerous person in the world, apparently. And it’s only when Goku meets Yamcha for the first time that he also kind of meets his match.

Nowadays, of course, it’s common knowledge that Yamcha didn’t exactly keep up with Goku’s progress. But their first fight is surprisingly even and helped to move Goku past just being the equivalent of a pint-sized slasher villain. 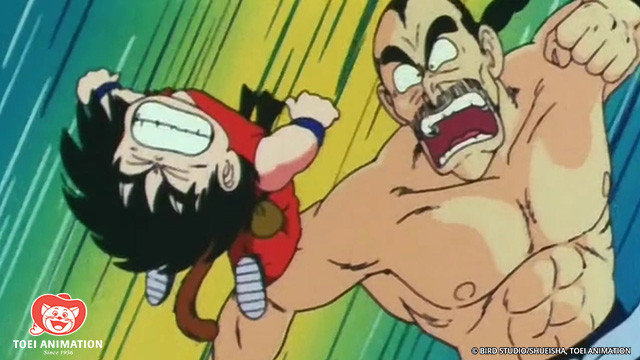 Tao wasn’t the first real villain that Goku encountered, but he’s definitely the first really bloodthirsty one. He kills multiple times without mercy in the build-up to his fight with Goku and then easily bests Goku, too. It’s such a change of pace that it almost feels like an entirely new story. Sorry, Goku. You’re no longer the main character of Dragon Ball. It’s now Tao, and the story will mostly be about him just murdering the whole world.

Not an exhibition fight between respectful opponents and not played for comedy in any way, Goku’s first trial against Tao increases the stakes of the show. It also foreshadows other, more famous ruthless villains like Frieza and Cell. And lastly, the rematch (which Goku wins) gives Tao a chance to be reincarnated as a Cyborg, which in my opinion, has always been the storytelling equivalent of a hole-in-one. 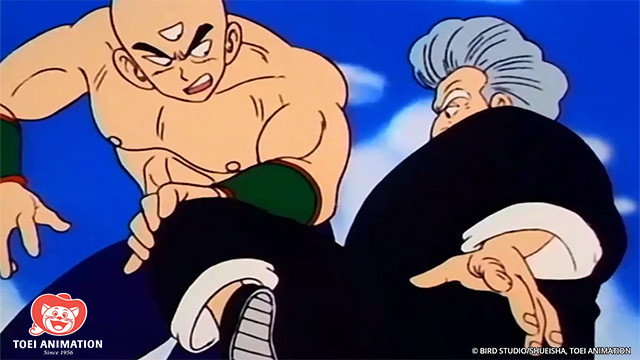 Under the guise of “Jackie Chun,” Master Roshi wins the 21st World Martial Arts Tournament. However, Goku puts up such a good fight in the finals that he’s like “Okay, kid. Ya got real promise.” However, when he enters the 22nd Tournament, he does the exact opposite, stepping down right in the middle of his fight with Tien.

Early on in the series, starting with his first “Kamehameha” and the first time that he revealed that he could be absolutely jacked under his clothes, Roshi is seen as almost a mythic figure. However, by forfeiting his fight with Tien, Roshi allows the next generation of combatants to flourish. He no longer needs to test himself against the future, because with fighters like Goku and Tien, the martial arts world is in good hands (and fists). 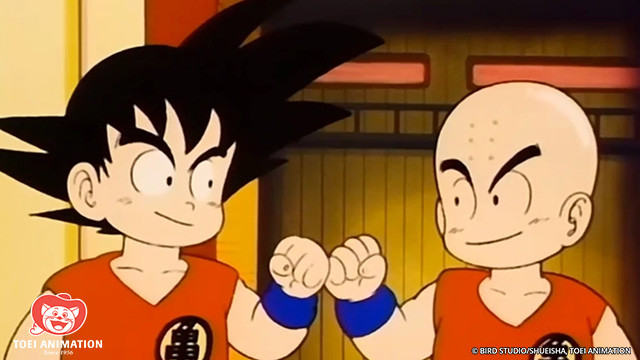 Everyone knows that poor, sweet Krillin probably won’t win the 22nd World Martial Arts Tournament. He’s facing Goku, and fighting Goku in the original Dragon Ball, no matter who you are, is like bringing a wet spaghetti noodle to a knife fight. But there’s definitely a sense of camaraderie and respect among Krillin and Goku, and they promise not to take it easy on each other just because they’re friends.

This would inform all relationships in Dragon Ball to come. These people are friends and training partners, and being able to spar with each other and trust that they’re each giving their best is the only way to gain strength. It’s a prototype for what will come later with Vegeta, even if Vegeta is a little less, umm, cordial than Krillin. 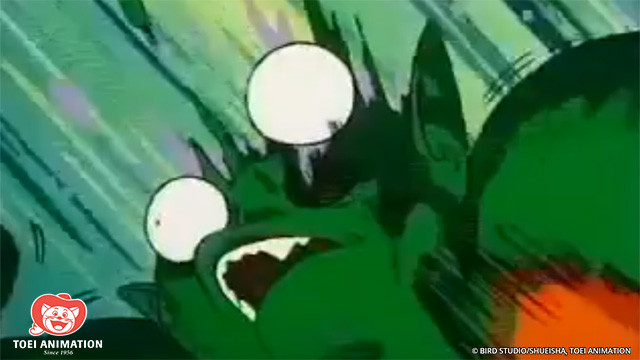 So everyone remembers when Goku used a Reverse Kamehameha and punched right through King Piccolo, starting a grand tradition of Dragon Ball warriors finding themselves missing about half their torso. Earlier, though, in an even more shocking display of violence, Goku kicks one of King Piccolo’s henchmen in the head so hard that the skull puts in its two week’s notice.

That poor henchman’s name is Drum, and his demise is a great look at the brutality that will eventually become a staple of a ton of Dragon Ball fights. So thank you, Drum, for your service. And sorry about your face. 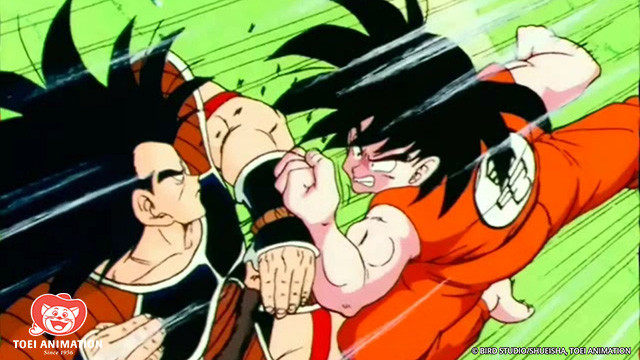 Goku and Raditz’s battle is pretty well known, but it’s still often in the shadow of the upcoming fight between Goku and Vegeta. However, there’s a very obvious difference between those two fights: In his clash with Piccolo against Raditz, Goku eats it. The dude dies. And this is in the fifth episode of Dragon Ball Z. That’s like if the second episode of The Sopranos ended with Richie Aprile just shooting Tony in the head.

But Goku’s death (and time spent training in the Underworld), allows for the other characters to shine. In fact, if you didn’t watch Dragon Ball and started with Z, you’re just now getting to know the cast at this point in the show. That’s important, especially when it comes to making sure that Dragon Ball Z doesn’t just turn into Goku And His Less Amazing Friends. 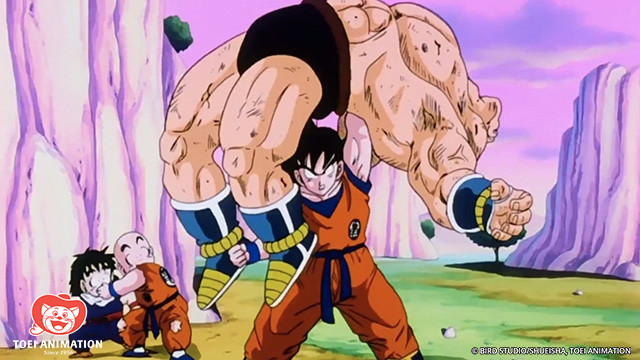 Nappa doesn’t look very promising. He’s big, muscly and bald, like Bane without the dope coats. However, he tears apart various Z-Fighters in his battle with them, and probably would’ve just eaten Gohan if Goku hadn’t come back and obliterated him. Then, begging for help, he gets destroyed by Vegeta. Like, come on, Vegeta. He wasn’t that weak. He could’ve been a pretty good barista or something.

This fight, where a relatively large cast fights a bad guy all at the same time, or one after another, shines a light on one of the most exciting parts of Dragon Ball. Yeah, it usually all comes down to Goku staring down some Warlord in a one-on-one deathmatch, but these fights are dynamic and surprising, and were a welcome treat whenever they occurred. 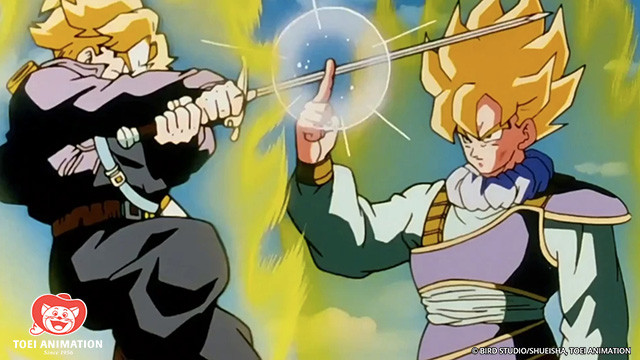 There’s a time when every hero kind has to step up and be the unflappable leader of their group. And when Future Trunks swings a sword at Goku and Goku doesn’t even flinch, it shows Goku’s evolution. After his fight with Frieza, he’s not really the underdog anymore. I mean, his fight ended with Frieza in multiple pieces. Hard to give Goku the Rudy treatment after that.

So here, Goku proves just why everything seems to revolve around him. He’s GOKU and he’s gonna DEFLECT YOUR BLADE WITH HIS FINGER and that is  ACTUALLY PRETTY DANGEROUS SO DON’T TRY IT AT HOME but it’s okay here because IT’S GOKU. 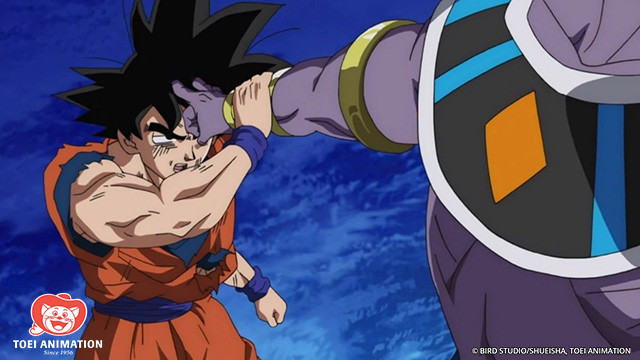 Dragon Ball Super saw clashes between gods, and its first arc ended with the long, desperate fight between Goku and Beerus. And despite this series being Goku’s grand return, Goku…loses.

But considering how powerful Goku had gotten at the end of Dragon Ball Z, is there really another way to kick things off? Goku might not be the underdog anymore, but if his power gets too overwhelming and he just wins everything, all of the stakes in the show are squandered. Losing to Beerus means resetting the tone of the show and makes it worth watching. Goku now has a place to go and a bar to hurdle. 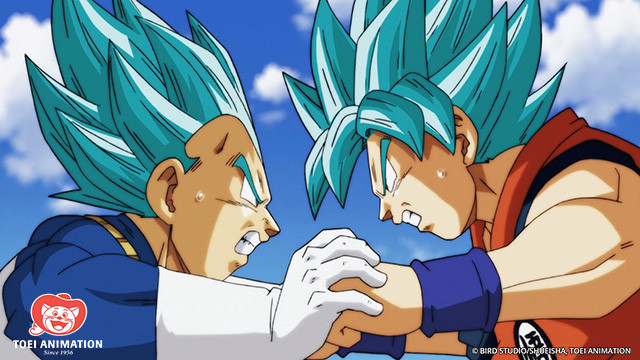 Ending a show is tough. On one hand, you could have all of the characters together, Return of the Jedi style, smiling at the camera and showing the audience that everything is gonna be okay for now. On the other, you could go for something with a little more depth.

Dragon Ball Super concludes with Vegeta and Goku briefly sparring with each other, and is there a more fitting way to end the show? Two former enemies that love to fight and have grown to respect one another dueling each other just to improve. It’s just about every theme of the show rolled into one, and assures us that, no matter what, Dragon Ball is forever.

What is your favorite fight in Dragon Ball? What would you have put on this list? Let us know in the comments!

Do you love writing? Do you love anime? If you have an idea for a features story, pitch it to Crunchyroll Features!