Charles Schwab’s plan to eliminate trading fees is driving massive expansion for the biggest US brokerage.

The firm announced Thursday it reached a record $4 trillion in client assets in the fourth quarter of 2019, a 24% increase from the prior year. It also reported $211.7 billion in core net new assets for the year, a 7% growth from 2018.

Schwab opened 433,000 new brokerage accounts in the fourth quarter, its biggest quarterly increase of the year and its first full quarter of data since announcing the fee cuts. The surge in new accounts signals that its ending of trading fees is pulling in new clients at an accelerated pace.

„During 2019 our commitment to seeing ‚through clients‘ eyes‘ prompted us to take a number of bold steps that further enhance our offer to clients and help position Schwab to build value for our stakeholders – clients, employees, and stockholders – over the long-term,“ CEO Walter Bettinger said in the company’s earnings report.

The brokerage reported quarterly earnings of 62 cents per share on Thursday, falling under analysts‘ consensus estimate of 64 cents. Revenue landed in-line with expectations at $2.6 billion.

Schwab traded as much as 1.7% higher on the news.

Schwab cut trading commissions on October 1 amid a price war among the brokerage industry. Rivals E-Trade, TD Ameritrade, and Interactive Brokers also eliminated fees in the fall, risking the loss of a key revenue stream to attract new clients.

The industry shift arrives as passive investing continues its surge in popularity. Traditional brokerages have struggled to stay relevant as 2019’s booming bull market propped up nearly all assets.

Schwab is also betting on a merger with TD Ameritrade to better position itself in the rapidly changing industry. The $26 billion deal was first announced on November 25 and stands to create a brokerage with more than $5 trillion in assets split between 24 million client accounts. The buyout is expected to close in the second half of 2020.

„With this transaction, we will capitalize on the unique opportunity to build a firm with the soul of a challenger and the resources of a large financial services institution,“ Bettinger said in a release announcing the deal.

The company has 10 „buy“ ratings, nine „hold“ ratings, and no „sell“ ratings from analysts, with a consensus price target of $53.73, according to Bloomberg data.

Alibaba took its biggest swing at Amazon’s US dominance this week, and no one noticed 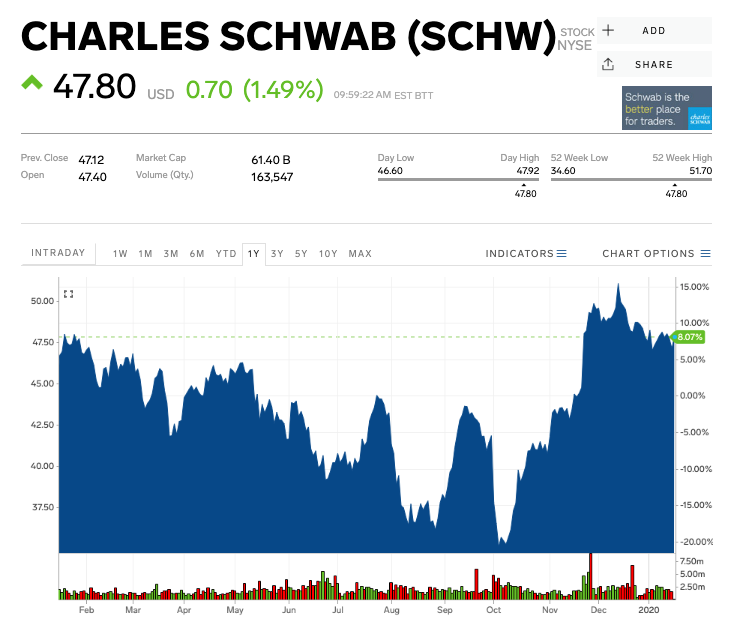