October, Halloween, and the season of scares might be over this year, but that doesn’t mean it’s time to pack up all of your horror media. Nintendo has brought back everyone’s favorite ghost hunting Mario brother as Luigi’s Mansion 3 has hit the Switch and lets you take Luigi and all of these pesky ghosts everywhere. For the first time since the debut of the series on the GameCube, Luigi’s Mansion 3 returns to home consoles which brings with it new ways for Nintendo and Next Level Games to give you new kinds of puzzles, gameplay, multiplayer, and all sorts of detail on Gooigi. With all of that, does Luigi’s Mansion 3 provide the kind of charm and fun that is normally associated with first party Nintendo titles? How much enjoyment is there when you’re vacuuming up the hotel you’re in? Will busting make you feel good? Is Gooigi the best? Well, that last question has a fairly obvious answer, but let’s find out about the rest! 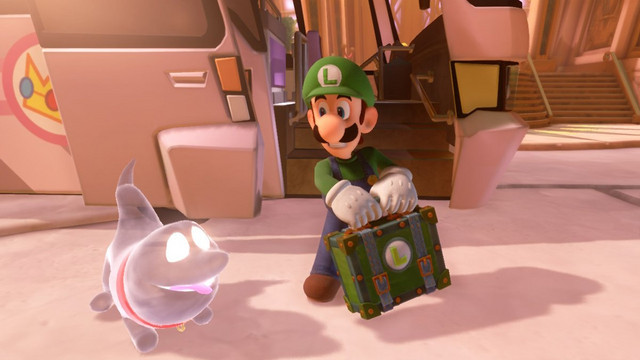 One of the first things you’ll notice when playing the game is that Luigi’s Mansion 3 is a beautiful piece of visual fidelity. In fact, it’s easily one of the best looking games on the Switch currently. Which seems like a weird thing to write. It’s as if I need to constantly double check that, because this isn’t a mainline game starring Mario or Link, this is Luigi, the B-tier Nintendo protagonist. Sure, a Nintendo franchise taking full advantage of the hardware in their console makes sense, but who expected this from a game starring the usual butt of jokes in the Mushroom Kingdom?

There’s just an incredible amount of detail on Luigi’s character model, all of the different environments you find yourself in, and with the enemy designs. It’s easy to see the stitching in Luigi’s hat and his clothing constantly. All of the different floors in the hotel have a distinct look from one another and the game is great with how it utilizes different kinds of lighting. Obviously there will be a lot of dark areas, which are used to be foreboding and spooky, but in areas that are lit up quite well, it’s vibrant and warm in the opposite way other sections of the game are. Again, Nintendo games are gonna look good, but I was anticipating this game to look good, but not great. Instead, this is one of the best looking games on the system, period. 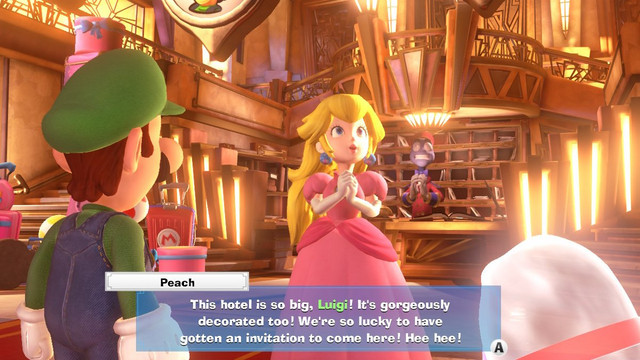 Unlike what the title suggests, you’re actually in “The Last Resort” hotel, not a mansion. No, you won’t have to cut your life into pieces to enter, but despite its initial cheery staff, things quickly turn scary for Luigi as everyone on this trip with him gets put into a painting. After that, you have to navigate each of the seventeen floors of the hotel to fight ghosts, bosses, and boos, while giving the place the deep cleaning it’s clearly needed for quite some time. There’s so much to blow around and suck up that you’ll probably wonder how Luigi is able to carry everything in his new Poltergust.

It seems as if the hotel’s proprietor, Hellen Gravely, found the chief architect behind the castle in Symphony of the Night to make The Last Resort with how wild and bizarre some of the later floors get. The first few floors are what you’d expect in a hotel. There’s a lobby, a dining hall, and rooms where you’d stay. Then it gets weird where there’s enough space to have a museum, a giant body of water on one of the floors, a pyramid, and so much more ridiculousness. All of this variety that you get makes for many different kinds of puzzles and boss fights that will keep you on your toes throughout the entirety of the game. You’ll also find yourself using Gooigi a lot as bosses and puzzles will force you to utilize both Luigi and Gooigi in intriguing ways. 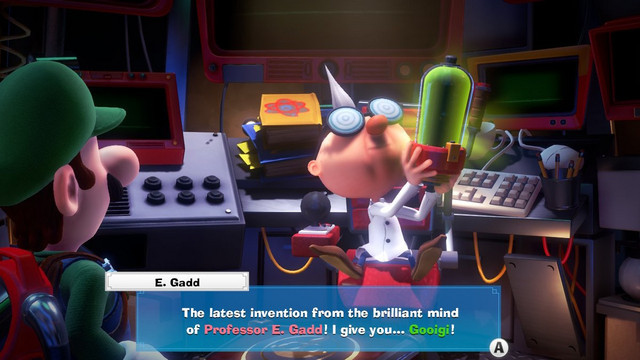 One aspect of the game that was surprising was how much of a physics playhouse it becomes, pretty much immediately. Most things that you’ll see in rooms, hallways, or wherever you end up and be tossed around, manipulated in someway, or vacuumed up to truly clear things up. It gets to a point as well when at certain points, the game begins to be reminiscent of the Red Faction series with how much destruction you can cause to an area. Luigi might be scared of all the ghosts that he encounters in this hotel, but if one thing is for sure, he’s an agent of chaos.

Luigi’s Mansion 3 also allows your friends to get into the action with a few different kinds of multiplayer modes. If you want to try and tackle the main story with a friend, that’s doable through local co-op with one person being Luigi and the other taking control of the fearless and tough Gooigi. What if you find yourself in a group of 8 people who want to play? Split them into teams of four for local Luigi vs. Gooigi competition. There’s also local and online co-op that sees you tackle randomly generated floors with different kinds of objectives such as capturing ghosts, acquiring money, making birds go away, or trying to escort some Toads to safety. The only downside is that I wish that the story co-op extended to being online as well, since playing this game with a friend throughout its entirety would be a blast. 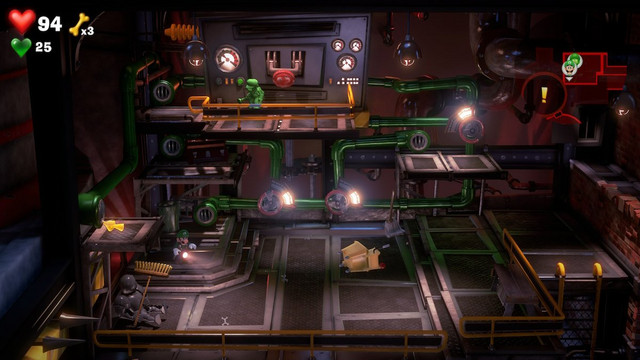 While there is fun to be had by vacuuming up rooms, flinging ghosts around, and being enamored with the games charm, it’s not always a smooth ride throughout. The overall movement of Luigi can take some time to get used to. It doesn’t quite have the same level of control that you’d expect from a third person action game. Moving and aiming the Poltergust feels just slightly off in a way that forces you to adjust to the games controls in the first few hours. This happens again later when you have to maneuver Luigi on an inner tube and you feel as if you’re fighting with the controls again. Luckily, this section isn’t too long, but it does correspond to a boss fight where the game hopes you’ve figured out the precise movement needed for the fight.

When the game wants you to be precise with where you’re aiming, that also brings up a problem as the game really isn’t designed for that. There will be times when you grab something with your vacuum and can then shoot it out. Most of the time, this is inconsequential as you’ll be doing it to get money or to cause outrageous destruction. However, when the game forces you to do this against bosses, especially the final boss, the game’s precision really begins to let you down. The aiming reticle you get is not the easiest to see at times and trying to get it where you want can be difficult as the slightest movement can send it across the screen. There’s a reason this game wasn’t made to have you constantly picking things up and flinging them at enemies. It doesn’t work great. Which makes it a shame it’s one of the key components to the last fight in the game. 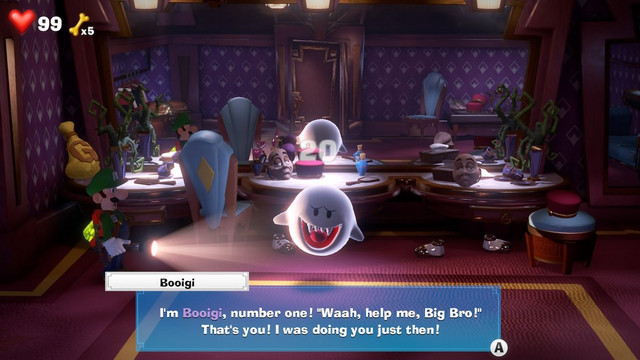 The pacing at brief times does get dragged down by some padding as well. For the most part, you’ll be going from floor-to-floor trying to find elevator buttons to continue upward. However, a certain enemy will sometimes get in your way, causing you to chase after and backtrack a bit. These sections really hit you like a wall with how they halt your progress and don’t feel as if they’re necessary. Considering the rest of the game has a really good flow throughout, it’s strange this roadblock shows up not once, but twice. Instead of feeling like more progression, you’re instead hit with what’s basically just filler.

After playing through Luigi’s Mansion 3, if there’s one person who doesn’t deserve the flack he gets, it’s Luigi. Even if Gooigi is inherently cooler, Luigi is a tactician. He might be scared when making his way through the hotel, but he’s methodical, takes his time to think things through, and comes up with a plan. Unlike his hard charging, moving-forward-no-matter-what brother, Luigi makes sure he has options. Maybe if he had been in charge of all of the other games Nintendo puts out, the Mushroom Kingdom wouldn’t constantly have kidnapping issues. Although, there’d probably be much less games, which is probably a bad thing. 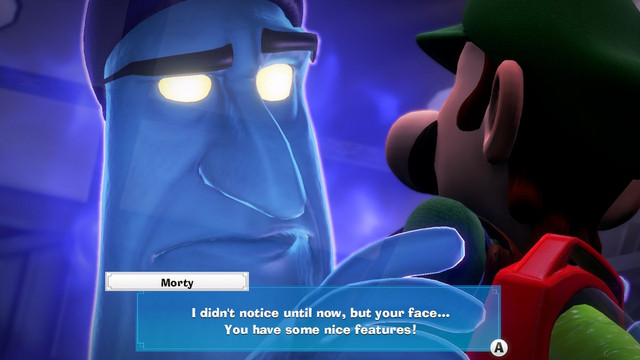 The charm that Luigi’s Mansion 3 provides keeps going throughout the entirety of the game. It won’t take you a long time to get through the story. Without going and trying to collect all the gems or fight boos, you’d probably breeze through the game in about twelve hours. Of course, if you want to get a high ranking at the end, you’re probably be playing for much longer. I went into this game with basically zero expectations and was pleasantly surprised throughout. If you need something to play that’s fun and enjoyable throughout, this is certainly a game to pick up. And hey, who knows, maybe someday down the road, we’ll get a Gooigi spinoff game.

+ Gorgeous visuals that rank among the best on the Switch

+ Hotel floors and bosses give a good amount of variety

+ Puzzles are fun and keep evolving throughout the game

– Controls take some time to get used to

Are you a newcomer to Luigi’s Mansion or have you played the previous games? What sort of ridiculous locale would you like Luigi to be sent to next? Do you think Gooigi really tastes like coffee? Let us know down in the comments below!

Jared Clemons is a writer and podcaster for Seasonal Anime Checkup where he can be found always wanting to talk about Love Live! Sunshine!! or whatever else he’s into at the moment. He can be found on Twitter @ragbag.

Do you love writing? Do you love anime? If you have an idea for a features story, pitch it to Crunchyroll Features!